When I moved to the US from Honduras in mid-2014, I had to decide where my dog, Bubu, was going to live. It was going to be costly and impractical to get him to the US. I resolved to find a home for my large German shepherd in Honduras.

Then, someone contacted me via a Facebook group for expatriates. She had a friend who was driving to Texas from Honduras. Would I be interested in lending my dog to Kevin?

Kevin had lived in Honduras, working with the indigenous Miskito population. Now, he was back in Texas, but he made frequent trips to Honduras. He was going back alone.

It was a dangerous voyage. On the way south on his latest trip, he had encounters with bandits in Guatemala and Mexico. Kevin thought a German shepherd would make an ideal companion for a solo driver.

So, off went Bubu. Our trips were not at the same time. I was flying at the end of July. Kevin 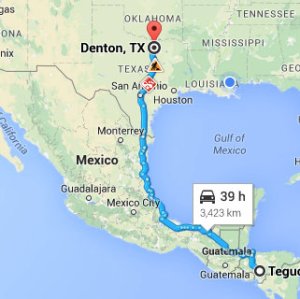 I learned Bubu had been useful to Kevin in Central America. They hadn’t faced bandits, but he had nearly broke a window in Kevin’s truck trying to take out Guatemalan border agents. In the struggle, Bubu had broken through his leash and leather halter.

Guatemalan authorities didn’t check the dog’s papers or Kevin’s, for that matter. The same thing happened in Mexico. My dog reacts strongly to guns and uniforms.

When Kevin reached home, he went inside to greet his family, and the dog jumped out, too. When Kevin came out a few minutes later, Bubu was seated in the truck grinning.  Kevin’s children love him. They want one of his puppies if I decide to breed him.

BuBu stayed in Denton, Texas for a month. I picked up Bubu in Senatobia, Mississippi. Bubu had escorted Kevin’s wife to visit family. Senatobia is in spitting distance of Memphis, Tennessee. It was another long journey for Bubu from north Mississippi to south Louisiana.

If you should visit, be warned. I own a German shepherd.

The charts on the side of this post show my pet’s journey. According to Google, Bubu spent about 54 hours in transit,

not counting time spent in border crossings or rest stops. He loves riding in vehicles.

Welcome to Gumbo YaYa. My writings are an eclectic blend. A Louisiana gumbo is a composite dish of roux, rice and whatever else the cook wants to add. Yaya is a Creole term for ladies all talking at the same time. The Gumbo Ya-Ya features my writing on spirituality, travel, culture, and humor. Grab a bowl of gumbo here and dig in! View all posts by Laurie Matherne

Welcome to Gumbo YaYa. My writings are an eclectic blend. A Louisiana gumbo is a composite dish of roux, rice and whatever else the cook wants to add. Yaya is a Creole term for ladies all talking at the same time. The Gumbo Ya-Ya features my writing on spirituality, travel, culture, and humor. Grab a bowl of gumbo here and dig in!

What if you wake up someday and you're 65 . . . and you were so strung out on perfectionism and people-pleasing that you forgot to have a big juicy creative life? Anne Lamott

Mardi Gras is the love of life.It is the harmonic convergence of our food, our music, our creativity, our eccentricity, our neighborhoods, and all our joy of living. All at once. Chris Rose

The old blog was mainly about my life in Honduras. I also wrote about New Orleans, Louisiana, life, but hardly ever did I write about gumbo. Check out the old stuff at www.honduras-gumbo.com